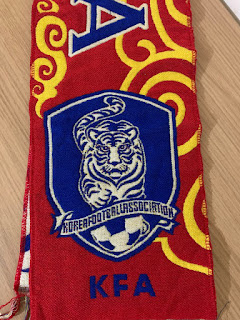 Another Korea scarf and one that probably saw a few games at the Seoul World Cup Stadium. I think that I wore the one that featured previously more regularly for FC Seoul games as it was more red and black than red and blue - like this one, which was the one I tended to wear for the national team. Going back to the issues with merchandise at stadiums, I think that I actually bought this from a shop of random things in Itaewon, probably in late 2005 or early 2006. The colours are more like the real deal on this one, although the red yin to the blue yang is a bit lost on a red background.
Post a Comment
Read more

Scarf of the day #20 Buxton

It's been a long time since I have been to a Buxton game, but they were the first non-league team that I took an interest in. This scarf must be from the 1980s. As a kid I really enjoyed visiting the old club shop with its array of random souvenirs from other clubs and programmes from across the league. I remember getting a Barrow pennant there and for some reason the programmes from other clubs that most stick in my mind are from Wales - Bangor and Colwyn Bay. I also met Neil Warnock there and got his autograph, when he was manager of Burton Albion. That was when he was still a chiropodist rather than Colin. Strange to think that Warnock was managing Burton Albion in the Northern Premier League, considering what both he, individually and the club of Burton have done since. Buxton however are still in the Northern Premier League (which is a level below what it was then) and have also spent some time in the Northern Counties East.
Post a Comment
Read more

Scarf of the day #19 South Korea 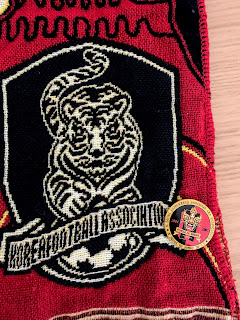 I could probably done with a warmer scarf today, but it serves me right for missing yesterday! Today we have a South Korea scarf, which I believe I bought at a 3-1 home defeat to Ghana which was actually after  the team had played in the World cup in Germany. As you can see there is also a badge on the scarf which is an FC Seoul  badge that the Ultras gave us. At the time Korea was one of those countries that the Premier League was clamouring to sell merch to, but oddly the K League seemed pretty poor at doing it for their own clubs. It might have been that FC Seoul were a fairly new club having taken the place of Anyang Cheetahs a couple of years ago, but I also went to a few away games and in general merchandise seemed to be a few scarves, t-shirts, badges and knock-off replicas, which as Man United were so keen on selling shirts seems a bit odd. Anyway, I had some great days out in the K League and at the national team games.
Post a Comment
Read more

Another day and yet another Villa scarf (that's 3 out of 18). This one is from some time between 2000 and 2007, as the badge illustrates. I can't remember where or when I got it. Hopefully, it will bring some luck in the game against Brighton today.
Post a Comment
Read more

Scarf of the day #17 Spartak Moscow

.... and a day after Dynamo Kyiv, we have their all time arch enemies Spartak Moscow. Now, here is a scarf that I would definitely not be showing to any friends and family in Ukraine in a hurry! The part of the scarf says 'Only Russia and Spartak'. The ends say ' Do you love Spartak? I do!' and 'I love Spartak Moscow'. I wouldn't describe my relationship with Spartak as one of love. They are associated as being 'very Russian' in the minds of many Ukrainians and I actually threw a Spartak shirt away during the initial invasion of the Crimea. There was also the ice hockey department and the controversial behaviour of the fans that rightly angered Medvescak and rightly so.  I lived in Moscow between 1995 and 1998 though and to be honest although it was sometimes a bit hairy as a foreigner in the Spartak end (one game against CSKA being particularly hair raising, where the military joined in with the CSKA hools on the Spartak hardcore) it did at least
Post a Comment
Read more

Scarf of the day #16 Dynamo Kyiv

Well here is a scarf of a team that this blog is no stranger to. This scarf is from a game against Tavriya back in 2013 that is covered in this blog. I had a season ticket for Dynamo from 2000-2003 and went to most games from 2007-2008. In between this blog going quiet and resurfacing, I had a trip to Kyiv where one of the matches that I went to was between Dynamo and Olympik Donetsk. Although the 'Donetsk' team were at home the game was played at Dynamo stadium, as a home game would have been at Olympiskiy. The atmosphere was good, but the game wasn't great. Dynamo took the lead through a Tsyhankov penalty on 13 minutes; Oleksiy Gai equalised from the spot to even things out and Nazryn Rusyn scored what was to be the winner on 39 minutes. As is often the case with Dynamo, not a lot happened in the second half!
Post a Comment
Read more

Scarf of the day #15 Cagliari 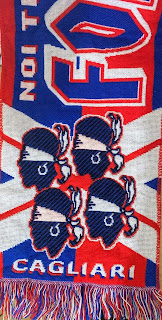 Following on from Lazio and my year in Rome yesterday, I spent the season that followed on the island of Sardinia. My local team and the team that I really followed were Sassari Torres. However, it was always good to have a trip to Cagliari now and again and a trip to the Sant' elia was always part of those trips. The trip wasn't that talented and the president, Massimo Cellino was universally disliked and they were ultimately relegated from Serie A. Patrick Mboma up front was probably one of the highlights.  That said, it was when the whole of the stadium was looking good having been revamped 10 years earlier for the World Cup and you did get to see some of the stars of Serie A. The first game I saw there was a 0-3 defeat against Udinese. Unfortunately, one of their rare wins during the period was a 1-0 victory over Roma with an Mboma winner, which I was also present at. The best game was probably a 3-2 defeat to a star studded Parma that included a young Buffon in goals. A
Post a Comment
Read more
More posts